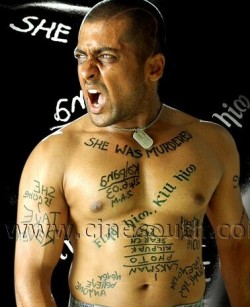 கஜினி is a 2005 blockbuster Tamil psychological thriller film directed by A. R. Murugadoss released on October 14, 2005. The film stars Surya Sivakumar, Asin Thottumkal, Nayantara, Pradeep Rawat and Riyaz Khan. It was dubbed and released in Telugu by Allu Aravind in November 2005, and was successful there as well. It was remade into a Hindi film by Murugadoss again, starring Aamir Khan with Asin Thottumkal playing the same role. The Hindi version broke all records and is the fifth highest grossing Indian film till date. The film’s concept is an inspiration from Christopher Nolan’s Memento.
The film’s story is around a rich business entrepreneur falling in love with an ad film actress. The entrepreneur and the actress fall in love, though she does not know that he is an entrepreneur. When she successfully saves a bunch of children who were in danger, she is brutally murdered by a gang leader and the entrepreneur himself gets hit hard on the head when he tries to save his lover, eventually leading him into a state of short term memory loss. He is later studied about and helped by a psychology student to take revenge on the one who murdered his lover.

The story centers on Sanjay Ramaswami (Surya Sivakumar), a rich businessman who owns a cell phone company named Air Voice and the events surrounding his relationship with Kalpana (Asin Thottumkal).
Kalpana, an advertisement model, meets with representatives from Sanjay’s company who come to request a business agreement and ends up telling her advertisement crew that she is Sanjay’s love interest – after the crew mistakenly thought that the executives were sent by Sanjay to ask for her love. She has never met him, but soon exploits popularity from her “relationship” with him and inadvertently gives an interview for a magazine. Sanjay, who reads the article, goes to confront her. On his way, he catches a fleeting glimpse of Kalpana (whom he doesn’t know yet) helping handicapped children to cross a street, and falls in love. He moves on to confront Kalpana at her advertisement studio and is pleasantly surprised to find that she is the same woman he saw a while ago. He chooses to hide his true identity, takes the name Manohar, so that he can get to know her. Kalpana eventually falls in love with him.
Once, while on a train to Mumbai, Kalpana saves a group of young girls from abuse by a group of goons led by Lakshman (Pradeep Rawat).
After a few days, the same goons come to Kalpana’s house in order to avenge their embarrassment. Incidentally, Sanjay arrives at the scene and fights off the goons, but during the ensuing fight, Kalpana is murdered. Kalpana never finds out that he is Sanjay. Lakshman then strikes the downcast Sanjay on his head severely with a metal rod. Sanjay survives the blow, but suffers a short-term amnesia.
His condition makes him forget everything that happened every 15 minutes. The only memory he has is of Kalpana’s murder, though he cannot remember the murderer. He embarks on a quest to avenge her. Despite his condition, he succeeds in finding and killing Lakshman’s men. Chitra(Nayantara), a medical student, takes interest in Sanjay’s case and meets him. Sanjay, reluctantly, adds her to his photo collection labeling her as a friend so that she could meet him and talk later. Later, Chitra finds his intention to murder Lakshman and tattles on him.
Lakshman is amused that a man with short term memory loss is trying to kill him. Nevertheless, he destroys all the information Sanjay collected, all his photos and even shaved the tattoos Sanjay had off so that he will forget his quest. However, Chitra finds and reads Sanjay’s journal and become sympathetic to his cause. She tells Sanjay who murdered Kalpana.
In the final confrontation, Sanjay fights with both Lakshman and his twin brother and kills them.

Initially, Ajith Kumar accepted the role and the film was to be titled Mirattal and also photo session took place but subsequently dropped out. Then the role finally went to Surya Sivakumar who grabbed it and it turned out to be one of the biggest commercial successes in his career. During an interview in 2006, Murugadoss openly admitted that the movie specially scripted for Surya.
Meera Jasmine was the first choice to play the role of Kalpana. But she dropped the project and later replaced by Asin Thottumkal which helped her to establish as the top lead actress in Kollywood.

In response to allegations of plagiarism, Aamir Khan noted “Murgadoss had heard about a film called Memento and the concept had really fascinated him. Without having seen the film he went ahead and wrote his own version of the script and screenplay. Having finished his script, he then saw Memento, found it very different from what he had written, and went ahead and made Ghajini.”

The soundtrack features five songs composed by Harris Jayaraj. While it was titled Mirattal, Yuvan Shankar Raja was the initial composer. A. R. Rahman scored the Hindi version of the film.

This film was a super hit and a turning point in Surya’s career. The dubbed version in Telugu was also well received and both versions were declared super hits

The Director of this film also made a blockbuster remake of this film with the same name in 2008. The film stars Aamir Khan ,, Asin Thottumkal ,, Jiah Khan ,, Pradeep Rawat and Riyaz Khan. It broke all records and became the second highest grossing Indian film grossing around

In addition to the following list of awards and nominations, prominent Indian film websites named Ghajini one of the 10 best Tamil films of 2005, with Rediff, Sify and Behindwoods all doing such that. The film also featured, prior to release, in “most awaited” list from film websites.

Jeffry is a Mechanical Engineer by education and an aspiring writer and blogger. After working hard for around 12 hours a day on his core job, he spends his remaining time in blogging and reading articles online. And he loves to make poor jokes, so be prepared.

This site uses Akismet to reduce spam. Learn how your comment data is processed.